Finally, off the New American beat.  Not only is ethnic just inherently delicious, it also refreshes a palate jaded from her favorite standbys.  Mandangsui serves exactly that purpose, and coincidentally, the name actually translates as "servant" in Korean.  A slightly-north-of-K-town Korean BBQ, the dining room is typical spartan, bare-bones cafeteria looking.  But not to worry: their energies are concentrated on your food. 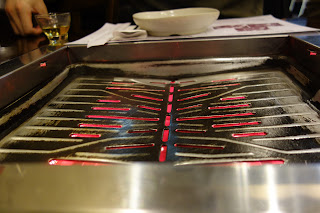 Upon being seated, we were provided multi-page, plasticized menus with vivid, easy(-ier) to identify pictures along with the Korean names and minimalist English descriptions.  But go with your gut, or be guided with recommendations from your "servant": they are knowledgeable and helpful... if a little deficient in the mother land's tongue.  Pointing always works wonders.  Seated at the rectangular table, a metal cover was lifted off the center to reveal an electric grill... you'll cook your own dinner to taste if you order the right things.  We did not, however, order the right beverage: a syrupy plum wine that might have passed as potable for a dessert wine was less than ideal paired with funky kimchee and vinegary pickles.  And those are not to be missed.

A vast array of complimentary salads, pickles and sauces are spread out like a rainbow around the circumference of the grill.  Once your food arrives, make use of them.  There was a nutty, sesame-oil tinged water spinach that made for a lively vegetable, a zippy red harissa-like dipping sauce, earthy rounds of purply lotus root, and that strange adoptee in Asian cuisine, a saccharine macaroni salad for who knows what purpose.  Certainly not to pair with a dumpling appetizer: we chose beef, fried which came off much lighter than they might sound, but still rather filling.

For the grill, a bountiful array of enoki, king oyster, shiitake and trumpets met their fiery demise as our server flipped and poked at them 'til doneness.

Each bite could be vastly altered with a touch of soy or kimchee or a bite of spicy shredded turnips.  Probably the condiments team up better with a carnivorous selection for the grill (note to you), but I do love me my mushrooms.

At any rate, they came in handy once again once our bibimbob arrived, because despite its multi-component structure, once our server homogenized it into submission it was, in appearance, a porridge hardly differentiable to chop suey, fried rice or even a dry risotto.  But the flavor was pronouncedly Asian, the rice tender and chewy with an umami punch from soy and richness from the beef and egg.  It had little spice, though, so here the kimchee was put to good use.  Still, there wasn't a tremendous amount of heat in any of the dishes except for sliced jalapenos which could be meted out to amp up the Scoville (recommended).

Although the menu has a section titled "Dessert & Drinks", it is really only a list of tipples.  But refreshing slices of juicy orange are post-prandially provided: probably all you'd want given the absent prestige of Korean pastry in the U.S.  And even if you got the accidentally got the plum wine to drink with dinner, hopefully there's a swig left in the bottle to perform as its only redemptive function.

Posted by webdebnyc at 6:44 PM