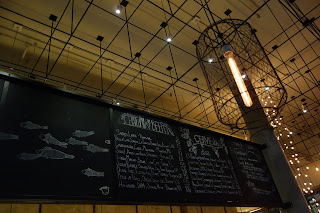 George Mendes strikes again with a second location, not far from his wildly successful first venture, Aldea.  Lupulo is more casual- boisterous in fact, with an energetic bar scene... the name is Portuguese for "hops", after all.  And had I know that before ordering a clear, crisp Vinho Verde to accompany the small plates of the rustic, Portuguese comfort food, I would've opted for one of their

cervesas, mostly like the Solid! American Wheat beer from my hometown, Portland, Oregon.  But the list is vast of both beer, wine and cocktails: Lupulo's food is meant to be drunk with.  Not to BE drunk with, although as long as that wasn't taken to the extreme, the restaurant is casual and lively enough that this probably wouldn't be entirely frowned upon. 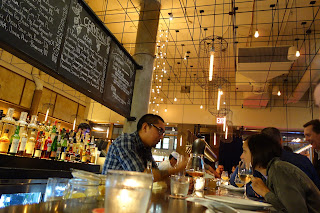 The bar curves around the middle of the dining room, and serves as the focus of the menu and the space. Bartenders are busy taking orders and blending drinks- it might take a second to get your order in.  But no rush; the vibe is animated enough to make Lupulo feel a bit like a party. 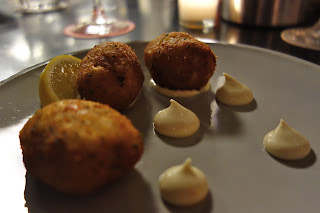 Befittingly, we started off with some wonderfully crisp salt croquettes with piri piri mayonnaise, which would've made for excellent party food.  They came from the Petisco section of the menu, but these  three voluptuous fritters were not so petisco, delicately cloaked in crunchy golden shells that broke to release the fragrant steam of pillowy tufts of chive-flecked bacalhau within.  Tiny daubs of the zippy piri piri mayo offered tang and spice, which were unfortunately two elements of the cuisine at Lupulo that were otherwise underutilized. 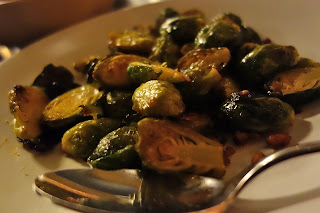 The menu is unreliably sized, but the prices are a pretty good indication, as a $15 plate of brussels (also a Petisco)  sprouts endured for the duration of the meal.  They were good, tossed with crisp bits of country ham and roasted apple for a touch of sweetness, and while I'm not sure where these fall along the scope of Portuguese authenticity, I'm not one to argue with a generous serving of brussels sprouts.   They could've also qualified for the section of Hortas, although perhaps these 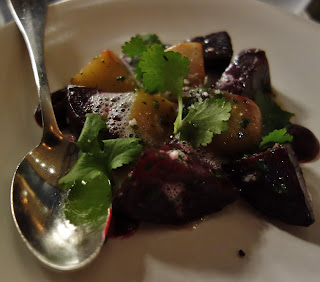 are all strictly vegetarian so the ham bumped
them out.  From here, we chose a small plate of smoky roasted beets, blitzed with cilantro and a mild sluice of foamy coconut.  The intensity of the smoke was a brilliant counter to the natural sugars of the beet and the sweetness imparted by the coconut.  In fact, this may have the the most successful dish all night. 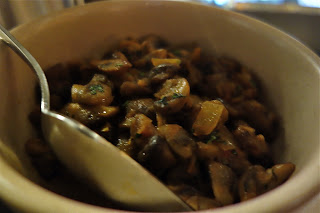 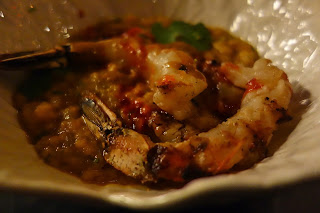 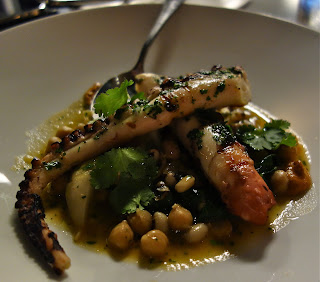 An intriguing sounding Acorda di Camarau was a sort of sophisticated pabulum of tomato and onion, but mild and a bit dull.  The potential for aggressive seasoning and bold, punchy flavors seems absent at Lupulo, whereas the setting and the philosophy of the restaurant seem to just be crying out for just that  The shrimp atop were fresh and briny, spoon-tender and fat, but there wasn't much to make them stand out from the porridge, or vice-versa.  Same goes for a main course of grilled octopus, which failed to achieve much char, although the chickpea and black eyed peas underneath made a zestier  contribution.  Tart turnips, assertively pickled stood out a little too blatantly, although the did their part to brighten the pumpkin seed romesco.   Maybe we would've been better off with another version of the eight-legged marvel that the Portguese usually do so well, a squid cooked a la plancha with clams, blood sausage and paella-esque squid ink rice.  And a side dish of mushrooms was equally ho-hum; a palatable dish of fungus, I guess, but if anything a bit damp and listless, serving more as filler than feature. 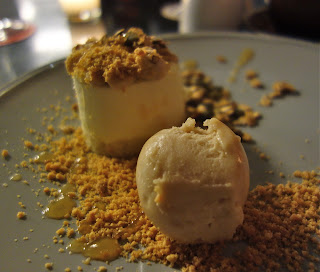 Desserts are simple and starchy for the most part, tasty little sweetnesses to finish off with.  The honeyed cheesecake we chose was just that, deftly composed and but not exactly earthshaking.  This is basically my take on Lupulo as a whole... it's a very striking and happy place to be, but the surroundings are more memorable than the food.  Which maybe the opposite case of Aldea.  Which THEN makes me wonder, perhaps, if I shouldn't learn how to say "repeat visit" in Portuguese. 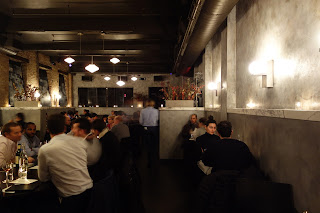 They always say you can tell the best Chinese restaurants because they are full of Chinese people.  Why the same isn't applied to other nationalities I know not, but it certainly does for the French, here at Rebelle.  Deep in Bowery, next to its (commensurately excellent) sister restaurant Pearl & Ash, Rebelle is firing on all cylinders.  The initial draw was the chef, Daniel Eddy, who not only worked at Spring in Paris, which drew global appeal, but also alongside one of my absolute favorite chefs in the city, Michael Psilakis.  And while his tact at Rebelle diverges from both of these influences, the quality is easily on par.  They call it Rebelle because the say they are trying to do things a little differently, and while I didn't detect much rebellion,  there was much to relish. 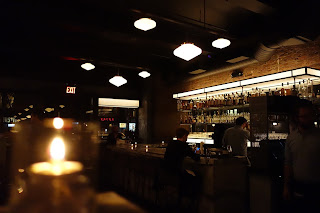 The room is industrial, subdued greys of cement and muted brick, with little adornment but some minimalist dried flowers and glowy orbs suspended overhead.  The focused attention concentrates on the food, and it is pinpoint-precise.

The price-points are white-tablecloth, but the vibe is not.  Perhaps the "R" (preserved from R Bar of yore) should stand for relaxed, because Rebelle is notably comfortable given the elegance of its cuisine.  Our server was attentive and amicable, and although his preferences on the menu might have steered us away from some of the dishes I prized the most.  The menu is formatted into four section, simply numbered, and it is recommended one choose a selection 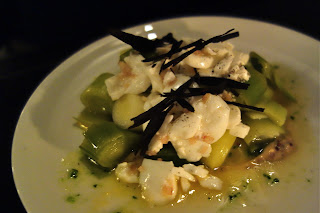 from each, a little like a set menu but with a little flexibility.  Veering away from raw meats (which are not my forte), we were left with two choices: Leek Vinaigrette and an eggplant composition.  The leeks were cool and fresh, steamed tender and tempered with 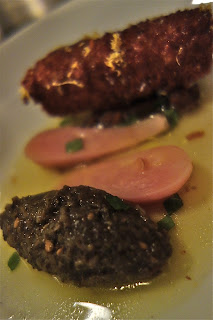 fluffy curds of soft boiled egg.  Incinerated shards of smoky leek showed a modern, Nordic influence, and a light dijon sauce retained the classic flavor profile.  The eggplant dish was  less colligated: a heavily fried, unidentifiable mass of the frittered nightshade tasted mostly of buttery breadcrumbs: not that there's much wrong with that, but it required the brightness of some pickled beets that accompanied to lessen the blow.  Similarly, a pungent quenelle of roasted eggplant jam recalled an intensified baba ghanoush, and it felt like the dish was lacking some simply grilled planks of the vegetable to justify its title, as well as round out the plate. 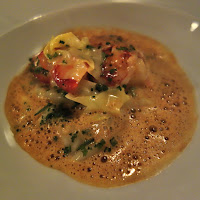 Moving onto SECOND base, things improved exponentially, even improving the dishes we already consumed retroactively.   Squash with treviso and espelette just sang of autumn: the roasted squash buttery and dense, its heady sweetness reverberating off
the spears of sharply bitter radicchio.  Lobster with cabbage and fine herbes recalled Michael White's butter-poached lobster at Ai Fiori.  Here it is less buttery, lighter and cleaner, with the low-brow contrast of humble cabbage ironically modernizing, and compellingly so. 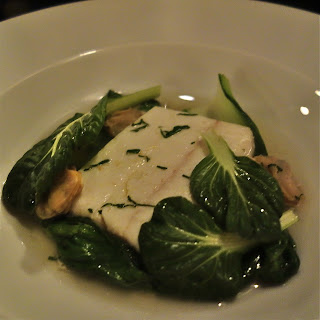 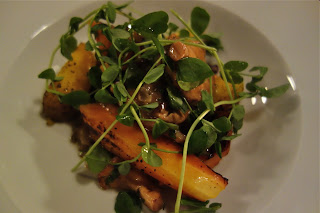 THIRDs comprise our entree-esque plates, none entering $30 territory.  The FIRSTs and SECONDs are what might add up, on the high end of appetizer prices and doubled-up, to boot.  But the halibut, a small ivory filet of ultimate tenderness floating in a delicate "ocean broth" is elegant in its simplicity, though nothing rebellious, and perhaps a bit plain.   The baby bok choy leaves aside made for an attractive contrast of color, but added nothing to this dish aside from roughage.  A vegetarian composition of carrots and mushrooms stole the show, though, the showy roots achieving the kind of mushy softness California cuisine had attempted to steal away, their caramelized edges  pepper-dusted to augment their sweetness.  Meaty chanterelles, shiitakes and black trumpets punked the carrots' natural sugars with umami, all shrouded in crisp pea shoots... I could've eaten this dish a thousand times.  So too a lusty pork with romesco, the "other white meat" not white at all.  In fact, its robust hue was almost shockingly rosy, its tender flesh, I'm sure cooked sous-vide, as startling tender so as to yield to the knife like a rich, soft cheese.   You could barely tell where the piperade ended and the romesco began, so befittingly did they colligate amongst a handful of tender white beans, a fanciful spear of charred leek lancing the ruddy color scheme.. 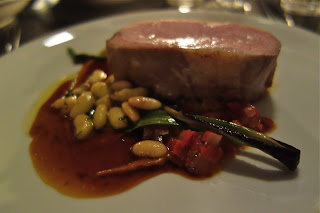 Desserts comprise the final FOURTH section, and are coincidentally four in number from which to choose.  The minimalist descriptions, as is the case with all the categories, might make it a little troublesome to make an informed selection, but our waiter was more effusive with more elaborate descriptions.  The grape clafoutis would have been my preference but it is a designated share, and really at that point only a single dessert between the two of us was feasible. 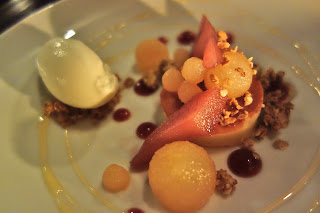 Funny enough, the highlight of the one we choose didn't even intimate the best part of the dessert- a moist, rich and densely tender disc of buttery cake underneath cool, crisp pears cut into planks and orbs.  Naked and raw, the fruit sort of sat about the cake rather than complementing it, but a creamy sheep's milk sorbet helped the components coalesce: ice cream heals many woes.   Overall, I wonder if Eddy couldn't amp up the rebellious quotient a bit, but the pleasure factor is en pointe.


Posted by webdebnyc at 3:11 PM No comments: