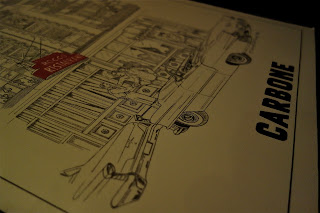 Mario Carbone and Rich Torrisi have achieved the trifecta.  It all began with Torrisi Italian Specialties on Mulberry Street, and then the more casual Parm in the same neighborhood.  Now Mario's name finally hits the marquis with Carbone.  The name, in fact, is simply a neon sign placed over the top of the address's prior inhabitant, Rocco, who had thrived in that space for nearly a century.  Carbone not only salvaged the old signage, but a lot of the allure and mystique of the old red sauce joint.  But, of course, with this duo at the helm, it is spiffed up and refined to meet the standards of this unstoppable pair. 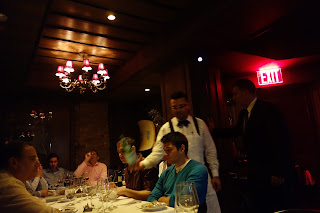 While I'd never visited the restaurant as Rocco's, they carried over its retro appeal.  The current decor exudes the swanky glamour of a 1950's era supper club.  From the red and black tiled floor to crystal chandeliers and grinning waiters in ill-fitting tuxedos, an old school charm abounds.  And leave your thinking cap at the door, because Carbone does not aim to challenge you (except if you don't know any Italian at all, because then you might miss some of the cheeky translations and plays-on-words throughout the restaurant).  While your at it,  check your coat as well, because even if you naturally tend cool, there is an welcoming warmth that immediately toasts things right up. 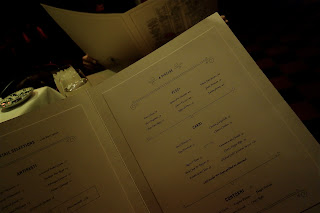 It feels like Carbone has a big heart.  It also has big menus, big portions and big prices.  Not that they might not be justified, but it's the kind of place you gotta know what you're getting into.  The ticket will be steep.  If you order an antipasti plate at $45 a head, there's no way you're getting out on the cheap (you're paying for really supreme quality here, so factor that in).  Luckily, you're bequeathed with an abundance of freebies soon after the menus arrive: nubbly hunks of pungent parmesan, a bountiful bread basket full of

focaccia, slices of nutty semolina, long, spindly grissini, and a charming little dish of surprisingly spicy giardiniera.  Consider these sustenance for navigating the
enormous menus, both in shape and scope.  You'll entirely lose your dining companion during the ordering procedure, so you'll have to make up your mind on your own or play curtain-call raising and lowering the comically large scripts to coordinate your orders: you certainly won't need two of anything.   Of the vast array of starters, I couldn't not try the Vegetable Supremo, only to find (much to my chagrin) that, actually, I couldn't.  They had been toying around with a few different configurations of it which never finalized, and then decided to scrap it entirely (menus that big get printed early and there was no going back).  Apparently I was, in fact, the absolute FIRST person to request it!  Granted, 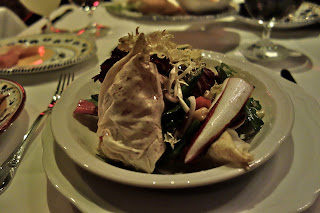 they've only been open three weeks, but to that I added amazement to my disappointment.  Sticking vegetal, I perused the salads.  There is a Caesar alla ZZ is prepared tableside, but the "House Chopped" is totally d.i.y.  Not only is the "salad" left off the description, so is the fact that you'll be doing your own chopping.  It's big leaves of stripey radicchio, frisee, crisp spears of treviso , julienned green beans, marinated mushrooms and ceci beans generously dressed are worthy of the effort.  It did cross my mind to request Louis (our server) to prepare IT tableside, but it was a delicious enough salad to forgive the oversight.

Assorted Baked Clams come nine to the plate: a triad of each, one featuring enormous globs of uni.  Underneath each topping are pristinely juicy little clams- they wouldn't have to be so good with all their accoutrements, but they are.  Despite the fantastic, graffiti-esque painting hung behind our table stating that "Pasta is what we are made of",
we didn't sample any of the myriad pastas on 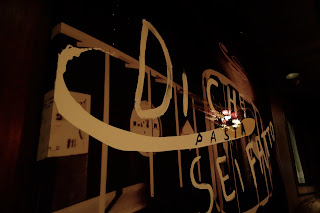 offer, but the selection runs the gamut from a classic Spicy Rigatoni Vodka to a more modern adaptations like Lobster Black Ties.  A return visit would definitely test the painting's theory.   Louis advised us that Mario's grandma's recipe meatballs could be ordered separately or added to anything upon request, so adding those to a selection from the Macaroni could definitely be a main course if you thought it not hearty enough to begin with. 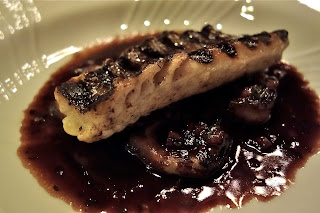 Main courses are divided into Carne and Pesce under A Piacere (Italian "to please", as if everything wasn't already doing just that).I was tempted by the Skate Francese, given how partial I am to that fish, but you know the Italo-Franco rivalry: I went for Bass Vino Rosso instead.  This was a no-fear preparation of fish, it's skin finally achieved that elusive crispness who's absence usually requires me to peel it back from the flesh to discard entirely.  Not this bass, and the meaty fish below flaked tender, white chunks into an umami-rich, lip-smacking bordelaise- a sauce so rich it's usually teamed with heartier meats, but Carbone achieves the impossible pairing a mild white fish with such an assertive sauce.  Like the clams, one could mask something of inferior quality with such robust flavor, but not here.  The fish is as impeccable as the sexy, burnished sauce is profound.  Lips will be licked.  Rivaling that for my favorite dish of the night was inarguably the Funghi Trifolati.

These are the Platonic Ideal of sauteed mushroom: not a hint of mush, edges crisped and centers dense.  Salty, chewy, tender, eyes-rolling back in your head delicious. And such an assortment: shiitake, matsutake, oysters, and trumpets mingled with garlic, onions and herbs.  Oh, I could've just had a bowl of these and called it a night (but for all the other delicacies I would've missed out on, of course). 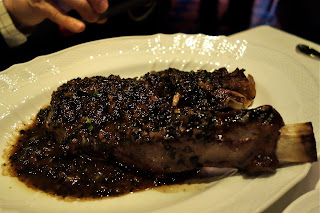 Veal Marsala is a behemoth shank, bone-in, smothered in a luxuriantly winey mushroom sauce, propped up by sauteed hen-of-the-woods mushrooms giving it a jaunty tilt on the plate. 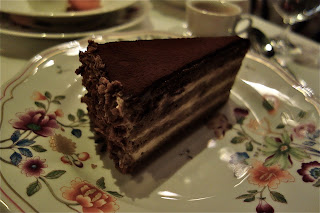 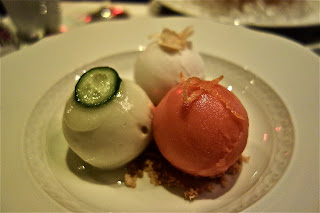 Delicacies, literally, are on the cart of desserts- although delicate they are not.  Really displayed on a rolling cart, like in movies of yore.  Big and beautiful, once again, with a monstrous tiramisu, gargantuan cheesecake served with a blueberry compote, these sweets are displayed whole, but they don't seem much diminished in size when you receive your portion.  A thick, cake-cut wedge of tiramisu loses its decorative ladyfingers in plating, instead the heel is coated in a rich toffee crumb.

The housemade gelatos are

outstanding- a cucumber-mint was my favorite: simultaneously refreshing and indulgent, but equally good was a creamy, mild coconut version and a zesty blood orange sorbet. 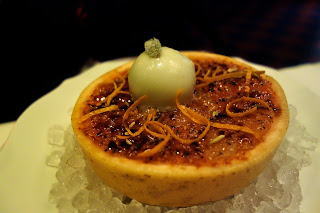 I am not one that typically considers fruit dessert (unless it is cobbled or pied or otherwise decadently adulterated), but Mario's insanely juicy bruleed grapefruit took on an exotic note with savory whole fennel and caraway seeds studding its crunchy caramelized sugar crust, daubed with an herbal gelato and decorated with shreds of citrus zest.  Not that any of this is necessary: each table is provided complimentary sambuca, housemade limoncello and vin santo along with a small plate of 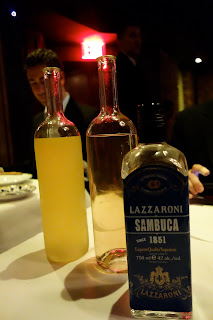 ethereally light crostoli that were hard to stop eating, or melting upon your tongue, as it were.  So delicate they were I'm sure the powdered sugar was the only thing keeping them from floating off the table.  If you paid attention to how full you were, these with a rich doppio from Intelligentsia would make a perfect finale, and more sane than the abbondanza in which we indulged.  Except for that that's the kind of place Carbone is.  Once in awhile, you just gotta do it up big.

Posted by webdebnyc at 5:43 PM