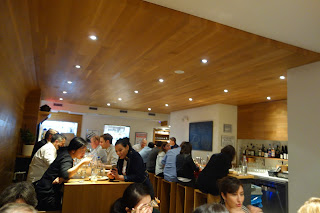 A very well-respected entity in the food industry told me that Momofuku Nishi was a different restaurant every week.  I'm not sure if he meant that it was intended to be so, or if it was just still sorting out  a massive identity crisis due to an onslaught of initial negative reviews.  I mean, David Chang is usually pretty impervious to criticism, and so it is that his new Chelsea venture, which began as a Korean-Italian hybrid, is still one of the toughest tables in town to procure.  It's one of those go super early or late spots, but at least it does now take reservations, another thing that has changed from its original policy.   Still, it does get packed, and the uncomfortable seating and tight quarters are some of the things that DO remain constant.  That, and a staff of somewhat unappealing surly waiters, more emblematic of a Chinatown hole-in-the-wall than somewhere charging $23 (with an optional $60 supplement for white Alba truflles) for a plate of noodles. 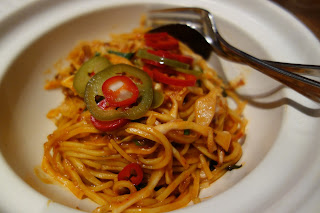 And those noodles can be worth putting up with the anti-luxe conditions: the ceci e pepe  that are now dubbed simple "Butter noodles" are a savory tangle of al dente spaghetti  swathed in a savory chickpea hozon to mimic the classic cacio cheese treatment, and a hefty grind of fragrant black pepper.  Less worth your while is Chili Squid, shreds of cabbage and squid tossed with a thinner lo mein and a decidedly fishy sauce.  The noodles actually tasted fishier than the scant strips of squid, and it was unclear whether a funky fish sauce was making that contribution or 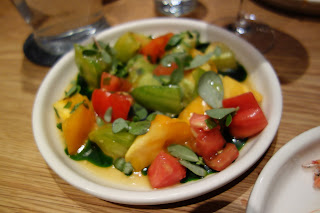 whether the squid just wasn't a la momente, but regardless it left a bad taste in my mouth, and on my mind.  A better choice might be the spicy beef that I was eyeing enviously in front of diners all around me: oversize spinach elbow macaroni mingled with fragrant shreds of tender beef scented with mint and topped with a crunchy frizzle of fried shallots.   I was happy to pick my mood back up with a stellar plate of jewel-like heirloom tomatoes wallowing in in a vibrant green basil oil strongly tinged with cumin.  It was a glorious tribute to close 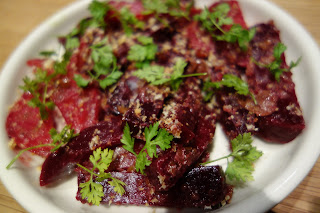 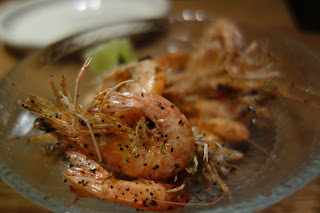 out tomato season with the exceptional fruits really starring in a sauce that enhanced their  lusciousness.  Just as good were the roasted beets, generously portioned and festooned with chopped chervil.  A meaty walnut bagna cauda referenced again the Italian influence, but the overall impression of the dish just celebrated the great roots, regardless of their.... roots.  Both vegetable dishes were obvious shares, for two or even three people.    As are most of the dishes, like a soft shell salt-and-pepper shrimp, the whole thing edible although you'll end up picking the little twiggy legs out of your teeth.  I preferred ridding the crustacean of his appendages and noggin', although consuming the outer shell was kind of nice, crunchy counterpart: like an all-inclusive fish 'n chips, no potatoes required. 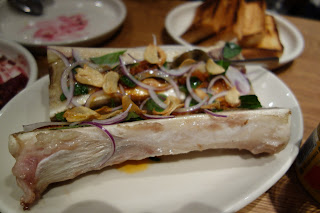 Another eye-catcher on a neighboring table was a behemoth marrow bone served with tender rectangles of toasted milk bread to scoop out its creamy interior.  This was about as ubiquitous as 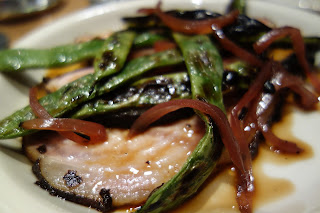 the spicy beef pasta dish, again reiterating the fact that I probably did not order that well.  That was illustrated by the roast pork that came next, which tasted more like ham than "the other white meat", incredibly fatty even aside from the thick fat cap that encircled each slice.  The flat, fat broad beans that stretched across the meat were probably the high point, as the pickly shards of onion tried their best to cut the fattiness of the pork.  The only other entree was an Ocean Trout, though, and in that it's a similar species to char, not my favorite even though I'd normally opt for fish. 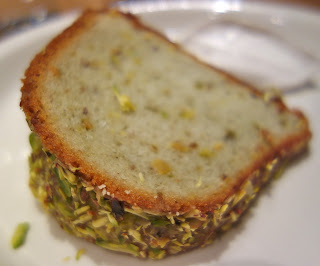 To close out, I have no fault to find with the moist pistachio bundt cake, its crisp edges nutty and buttery, and the whipped ricotta with which it was served completely redefining this often gritty and maligned cheese.  Nishi's version was ethereal, densely creamy yet light, and luscious to pair with bites of cake.  That said, it was a fairly heavy finish to a fairly heavy meal, and if I could have yet another do-over for the night, I'd head a couple store fronts down the block and splurge on a cup of soft serve from Milk Bar, Cristina Tosi's associated dessert mecca conveniently nearby.  But anyways, if my friend was right, I can come back again in a week or two, and run no risk of repeating my missteps.


Posted by webdebnyc at 3:09 PM No comments:

Maneuvering through what is almost inarguably the dodgiest area of town to approach China Xiang, my expectations for the restaurant just about imploded. Needless to say it was quite heartening when the food began to arrive to squelch this misperception. The room itself is pretty bare-bones, although a step up from what you normally find in Chinatown. Charcoal grey stonework comprises one wall, and there are some attractive

modern lanterns suspended from the ceiling, but the windowed facade looking out onto a shoddy stretch of 42nd street doesn't do
much to improve the ambiance.

So shift your focus to the voluminous menu, spanning from an innocuous but respectable saute of mixed vegetables, to more audaciously authentic Hunan fare like chili-spiked frog or baked corn with a salted egg.
While the former is a laudable, if somewhat uninspired, melange of crisp-tender broccoli, enoki and straw mushrooms, plus the requisite water chestnuts and bamboo shoots, the hacked-up frog jumps in (no pun intended) to
sate more ambitious palates. It boasts an incendiary duet of chilies, red as an engine and green as… well, frog. It is the scarlet ones to which one should pay deference, although the frog-hued ones too are not just there for decoration. Pay attention to the bones, too, as this meat will need to be sucked off of them. If that's a little much for you, there is the American Chinese section of the menu, as well as numerous soups, rice dishes and noodles, of course, skinny lo mein or fat, hand shaved ones slicked with a subtly sweet, umami-rich glaze best teamed up with meaty pork of beef. The more delicate shrimp we ordered didn't add much, and the heft of the noodles sort of overwhelmed them.
The ingredients utilized are all
exceedingly fresh, from garlicky flaps of slippery, floppy woodear mushroom accompanying a sauté of tender chicken with sweet red peppers to fat bulbs of brilliant jade bok choy steamed juicy and crisp. To quaff is beer and wine only, and while the pinot grigio they have on hand works well enough with the cuisine, it's not a particularly admirable bottle: better off with suds. 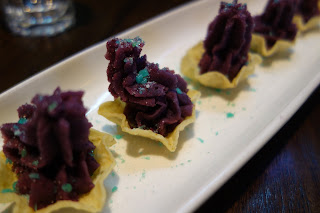 The service is basically what one has come to expect in a casual Chinese restaurant, but glasses of ice water are efficiently refilled and a server will readily come to your assistance when beckoned. As far as desserts go, you don't get to choose. There's one option, a funny, somewhat pasty puree of purple potato piped into, weirdly enough, miniature Tostitos Scoops, and to add to the hilarity, spritzed with a sprinkle of turquoise Pop Rocks. Get these just for the novelty if you're inclined, because although consuming one is an amusement, it's hard to imagine anyone wanting more than a taste, let alone the six of which arrive. Otherwise, grab a fortune cookie from the deep bowl at reception and ponder your fate on a white slip of paper as you exit, hopefully with a great enough satisfaction from dinner to distract you through the unsavory sidewalks of Port Authority on your way home.