I had been recommended Mémé several times, but only by strangers with who I struck up restaurant convo.  And they were primarily neighborhooders, so I assumed that while it might be good with the qualification of proximity, I wasn't sure it would live up when held to a higher standard. But since 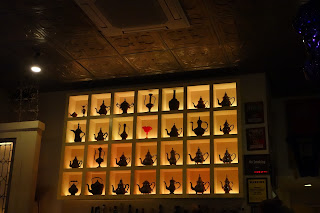 this is the West Village, maybe that is the higher standard, and regardless, it's close enough to me that ruing the commute wasn't going to be in issue, like it or not.  And thankfully, Mémé turns out to be quite a little gem in its own right.

It is not, in fact, definitively "exciting", but it still imparts a festive quality and in every aspect of its execution, there exists a small bump of effort that raises it above the expected, whether it be the warm sincerity of the host's welcome or even a little extra drizzle of quality olive oil that makes a dish seem just that little bit more decadent. But there is no pomp or excess: simplicity is the key here. 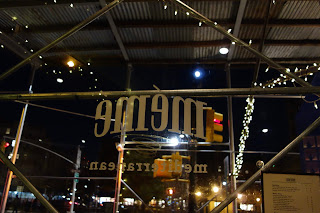 A string of fairy lights adorns the (unfortunate) temporary scaffolding outside, and whether the server noticed my squint from its glare, or that it is a habitual nightly practice, the swath of aluminum foil in which he wrapped the bulb effectively turned it "off", and simultaneously amplified the flow of the string lights.  At Mémé, you feel like they care, and that's before any food even arrives, which is no small feat.

The first thing on your table will be a small complimentary dish of olives and pickles, snappy and fresh.  A  plate of roasted mushrooms arrives in salad form, and while it was described by our waiter as small, it was easily ample enough for my stablemate to 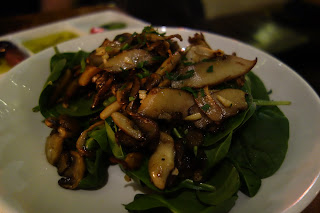 steal more than just a few bites. And steal he did, 'cause they were really good... super garlicky but otherwise just left to their own excellent mushroominess. They were flavorful enough not to need any additional dressing or sauce, and I'd order them again. 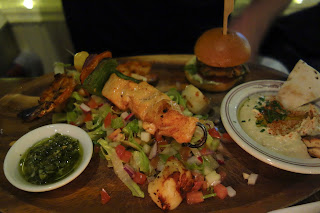 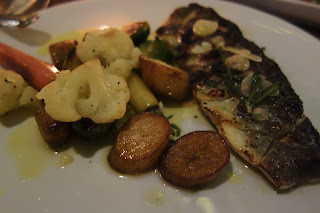 A seafood grill made me wonder how to say "smorgasbord" in Israeli, but it had enough variety and flavor to quickly distract me from linguistics.  There was a kabob of firm salmon, rife with the flavor or the grill, and some nicely seasoned shrimp and scallops piled atop a refreshing chopped salad, crisp and plentiful. A zippy charmoula added extra pizzazz, and a small dish of creamy hummus made itself readily available for dips and smudges... as well as swipes from across the table.  Besides that, I was torn between the chicken tagine, a stew of rock shrimp and a simple grilled branzino, the latter which I was steered towards by our server. It was excellent advice (although I'm sure I might have said the same of either of the other two choices as well), having achieved a crisp skin tasty enough to prevent me from peeling it off to discard, my normal practice with fish skins.  My only complaint was that the Brussels sprouts, there being only two little halved ones included, weren't sufficient to sate my quota, and I rued not having ordered the roasted ones on the menu with their onions and manchego- as such, these would perhaps warrant a return visit.

That, and the apricot bread pudding.  I mean, really?  There was apricot bread pudding and I didn't get any?  I think the verdicchio was getting to my head...but also, the food is generously portioned and surprisingly filling, so I really had inadequate capacity left for dessert (such an unfortunate scenario...). But like I said, West Village isn't my neighborhood, exactly, but it's close enough.  And while Mémé has all the guises of a neighborhood joint, it far surpasses any limitations one might ascribe to such.  I get why people kept telling me to go there. 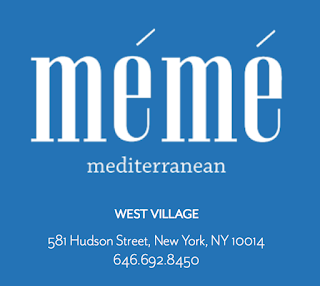 Posted by webdebnyc at 4:46 PM No comments: