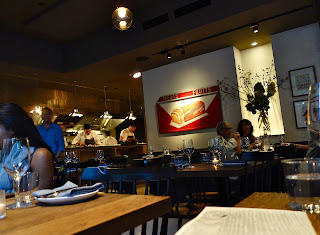 Some of the buzz may have worn off at High Street on Hudson, a cozy West Village eatery that was all the rage when it opened up almost a year ago, but that only makes a table that much easier to procure.  Because the quality has held the line if not superceded it, from what I discerned from a late summer night's meal.  The space is a little dark, but not at all dreary.  An open kitchen illuminates the from the west, which is a busy hub of activity, starkly white-aproned chefs busy at their tasks, creating all the delicacies your are soon bound to enjoy. 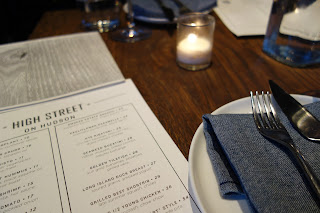 Aside from the plates we ordered, I got a good glimpse of a handful of others given the tight proximity of tables, as well as a very friendly couple sitting next to me.  They approved of everything they ordered as enthusiastically as I do, and I got a preview of what was to come.  A hefty, oval slice of bread was heaped generously with mashed up bluefish salad, dotted with onions and radishes.  Actually, this does introduce a sort of strange phenomenon for a place that prides itself on its bakery, whose homepage is a food porn centerfold of crusty loaves and moist teacakes: there was no bread provided throughout the course of the meal, and only available as "Breads and Spreads" from the Lighter Fare section of the menu for eight bucks, so you gotta have dip. too.  Perhaps the "Leave it To Us" prix fixe at $65 a head provides a sampling of the boulangerie, but it would've been nice to have a few slices alongside our entrees, for sure. 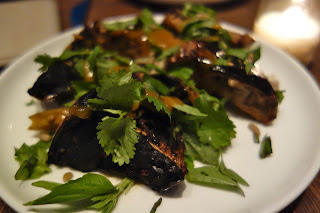 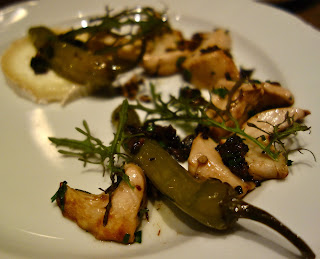 Or even the appetizers we chose, two of which sported magnificent saucy components that would have appreciated a crust or two for swabbing purposes.  A smart grilled eggplant showed none of its oil-philic properties, leaving it light and tender under a thick drizzle of salty miso paste, freckled with toasty sunflower seeds and pickly rings of okra that left their mucilaginous trail across the plate like sticky spider-web threads in a not unappealing way.  Sizeable nebrodini mushrooms (a cousin of Trumpet Royales) were roughly chopped and grilled, crowned with two oblong green peppers that were deceptively NOT shishitos- spicy as all get-out, leaving me in further want of that non-existent bread basket.  The rinded puck of tangy goat cheese helped douse its piquancy in a starch's absence, and although the cheese itself wasn't soft as described on the menu, it was much tastier than typical chevres to which I am accustomed, with more body and verve and less farmy funk. 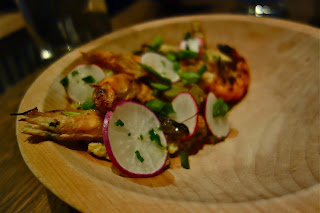 The best dish of night was a super coarse fresh corn polenta served with soft shell shrimp for consuming cannibalistically in their entirety.  But even with the enjoyable novelty of devouring the whole crustacean, head to tail, the polenta was the scene-stealer.  It was shockingly corny, its tender, pebbly granules of corn grits melded together in a creaminess, green onion adding a pronounced allium bite and a verdant freshness.  Fun to eat the shrimp whole-hog, even thought the taily end and the spiny, long-whiskered head were less enjoyable to masticate in practice than in theory.  The meaty body in between was exquisite, though, and listed at just $15 as an appetizer, it could act as a reasonable entree for a cheapskate (no shame!) and was far more interesting than the tilefish main I did order, even though our server steered me toward the latter. 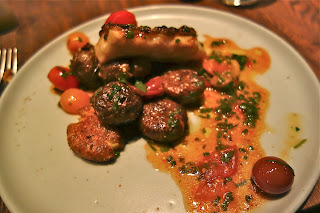 The tilefish itself was flavorful, although the texture was a bit mushy; roasted sun-gold tomatoes helped perk it up decidedly, but the best part of the dish were the smashed potatoes, salty of skin and in a rainbow variety of colors, purple to gold.  The Grilled 1/2 Young Chicken was tender in its youth, juicy-fleshed under a nicely burnished skin.  Corn succotash underneath had its sweetness augmented with chow-chow, compounding the dish's summery classic American appeal.  There is a "Leave it To Us" 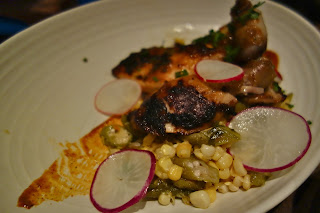 option at just $65, a prix fixe of the chef's choise which might be a great way to experience High Street, for if anything, I was certainly left with a curiosity to experience more of what there was to offer. 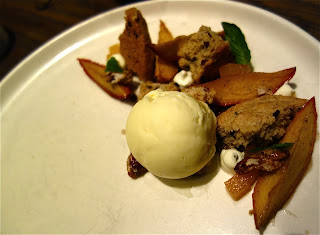 Onto desserts, I'll forgive them their paucity of peaches in the snickerdoodle concoction, but I cannot entirely forgive the un-snickerdoodliness of the affair.  It was great, the buttermilk ice cream sublime, but really quite misnomer-ed.   Softly crumbly biscuit studded with seeds didn't taste at all like snickerdoodles: in fact, any cinnamon sugar component was quite absent aside from a pleasantly gritty smear beneath the ice cream.  The peaches were slightly dried, giving them an unexpected chew (I wonder if this wasn't to mask the un-juiciness of subprime peaches, but in any case, it totally worked).  The overall dish was great- I'd order it again.  But it should be called something else. Snickerdoodles impart a distinct nostalgia, and while this dessert had all the yumminess going for it, it had none of the snickerdoodliness.  Other than that, I was so glad none of the quality implied from the initial hype as worn off.  High Street's ratings come in as high as ever. 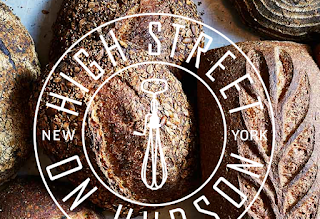 
Posted by webdebnyc at 2:51 PM No comments: 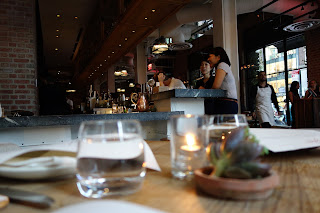 Jams was THE place in its hey-day, back in the '80's, introducing California cuisine to the New York dining scene as a novel genre, celebrating market-fresh ingredients and lighter, breezier cooking techniques.  Although Jams closed before the nineties began, Chef Jonathan Waxman never faded from the scene, cooking in or consulting for twenty some-odd restaurants and fathering the ever-popular Barbuto in the West Village.  Perhaps on the coattails of its success, and a bit of nostalgia for the good old times, he resurrected Jams, this time in midtown occupying the ground level of  1 Central Park Hotel.  While in the eighties, the idea of cooking on a wood-fired grill, minimalist preparations of organic, seasonal ingredients and celebratory vegetables was enough to draw crowds, today it is basically a given.  So while the bar of expectations is a much higher today for type of food, the seasoning and innovations of the menu seems somewhat tamped to placate its midtown clientele. 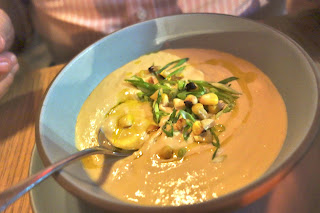 That said, there is still a pleasant meal to be had at Jams... but it might take you awhile to get through it.  Service is a bit lackadaisical, and not particularly engaging even when you have their attention.  The menu is of standard format- there are few, if any, quirks that need explaining.  No real surprises in most of the dishes, either; the cooking here is rather straightforward.  A chilled corn soup with charred scallions was creamy and smoky, a nice late summer starter.  A kale salad could've held up pretty much any time of year, but the heirloom tomato with cucumber and melon certainly spoke of the bounties of August's 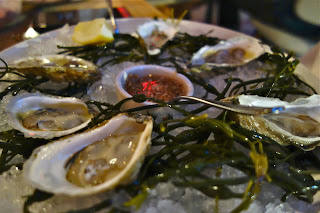 market.  Peter's Point (MA) oysters were served a half-dozen, on the half shell, but almost double too much money, at $21.  They were good for the time of year, although notably briny.  For a restaurant priding themselves on market seasonality, the Starters seemed a little heavy, and lacking in vegetable/vegetarian options, so I took an offering from the side dishes, a whole roast tomato.  It was flavored like pizza with garlic, fennel and oregano, and baked 'til it succumbed to the ovens heat, releasing its plentiful juices that would've been wonderful soaked up by some slice of a chewy loaf, but continuing in true California-style 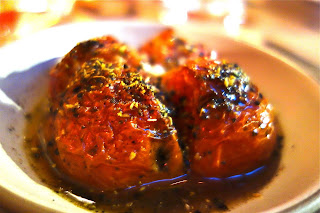 (365 days a year bikini-season) no bread was offered, nor do recall any for purchase on the menu, so most of those fragrant drippings remained in the bottom of the bowl.    Snackier options consist 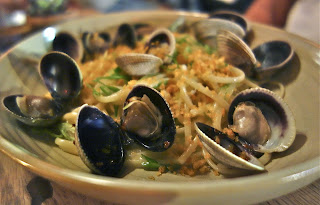 The one pasta we tried was basically the white clam sauce classic, snazzed up with spicy breadcrumbs whose spice really of infiltrated the whole dish, making for quite a piquant little plate of noodles.  Clams were small but numberous, impeccably fresh and plump.  Gnocchi with corn and tomato, a seafood risotto and a hearty gemelli with braised pork shoulder joined its ranks. 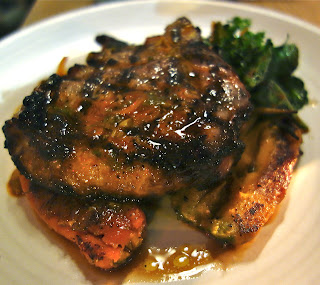 The menu included five options for main courses, plus an evening's special pork chop served with lightly braised, leafy kale and spiced, charred carrots.   The kale was a little sour eaten on its own, but cut up in little bites to pair with the robust pork it made a nice condiment-type accompaniment.  Olive oil poached cod shared the plate with whole, miniature patty pan squash and slices of grilled eggplant.  The cod, too, might've worked better had it been thrown on the grill as well, the delicacy and softness achieved by this method of cooking less complimentary to the hearty smear of rugged romesco, with its chunky bits of almond, and abundant smattering of intense olives with which it was served.  It would've been better off with less aggressive bedfellows, or else grilled along with them to attain more continuity. 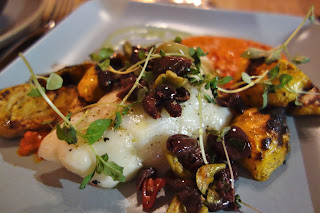 And again, without any bread, I used the

remaining romesco to pep up a rather lackluster side dish of fairly un-garlicky garlic sauteed green beans. 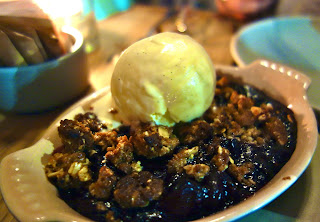 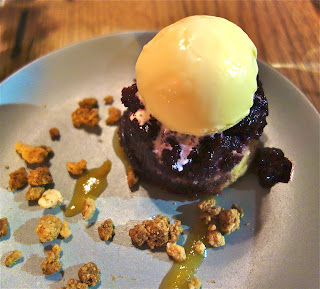 The best part of the meal came to close it out, which is always nice- ending on a high note.  And I actually thought that virtuoso would be the peach and blackberry cobbler, with is oaty, buttery crust, but in the end,  the stage-stealer was a moist, juice-steeped blackberry upside down cake with sweet corn ice cream.  Its ice cream could've been more intensely corny, but it was enhanced by the golden polenta cake, stained with the inky juices of the berries like sticky fingers after a day of picking.  The coffee that I got with it was just as outstanding, a rare occasion where the lack of caffeine seemed to be made up for by the depth of flavor.  After such a successful dish, I wondered had I ordered better, like going for that signature roasted chicken he made so famous here, and lives on at Barbuto, perhaps I could've experienced a more satisfying Jams.  Those who have fond recollections of the original might benefit from the nostalgia they could to apply to this new version, but more likely Jams will thrive on hotel guests, the restaurant desert of the area,  and midtown foot-traffic familiar with Waxman's celebrity.  And they won't be disappointed, but a native might find themselves a lot happier heading downtown where his talent  never needed reintroduction. 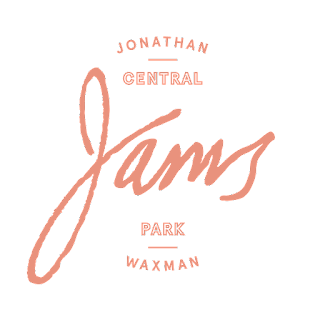 
Posted by webdebnyc at 4:40 PM No comments: