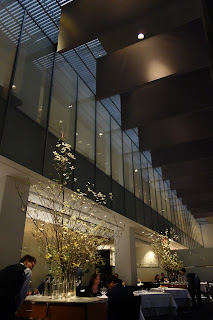 I forgot I had actually already once visited The Modern.  However,  I did not dine there, though, most unfortunately... I collaborated with Bryan Miller on a story about restaurant lighting, which is only just one of the brilliant aspects that this institution nails with laser precision.  We entered through a tomb-like vault of their glass-enclosed wine cellar, simultaneously glittering and shadowy: the consummate chiaroscuro.  The Bar Room presents itself first, and the dining is cached behind a silver wall that separates the two.  The far wall is simply a huge glass pane looking out into the museum's sculpture garden.  On a strikingly cold evening that the calendar forgot to play spring, looking out onto the glassy pool and looming statues, the trees pruned with Tim Burton-esque panache, the effect is magical.  Inside, the light is glowing and warm, seating is comfortable and it is clear as the crystal glasses clinking their jovial din that you are welcome and appreciated here. 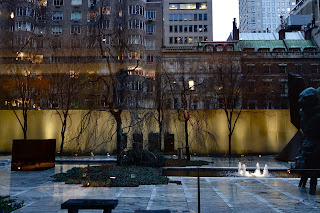 Lofty branches of dogwood centerpiece the room, indicating the onset of spring as much as the menu does, even if the forecast was not cooperating.  There are three tactics to approaching the menu here: a three- or four-course prix fixe, or an eight-plus course tasting menu, ranging from $118 to $198... pricey to be sure, but this is one of the few New York restaurants that has trnsitioned to tip-less pricing.  So once you've selected your menu approach and beverage accompaniment, you needn't preoccupy yourself further with the cost.  The wine list, immense as it is, is just as accommodating of this: we chose a most modest, absolutely drinkable Jaquere at just twelve dollars a glass, but you can easily splurge up into the three digit zone, high-end four for bottles at the top echelon. 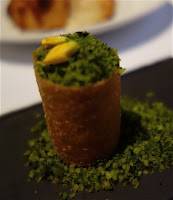 Most importantly is the food, which is as gorgeous as its surrounding, and given that this is The MoMA, the surrounding are quite literally the height of gorgeousness.  You'll begin with a small flight of amuses: a small plug of condensed pea encapsulated in diaphanous crisp shell that celebrated the classic harbinger of spring in all its glory.  A farm egg,

quivering in its wobbly, barely-cooked state, was orbited by more peas and a profoundly verdant puree of sorrel, an accommodation to my aversion to raw fish.  The original version (pictured) is crowned with smoked salmon and
anointed with a smoky cream.  Simple
flavor profiles with exceptional depth.  No more so is this evident
than in a first course of Provencal white asparagus, thick juicy planks whose mildness showcase the bright slash of spring vegetable vinaigrette, at once bold and delicate.

Marinated blue shrimp, cool and oceanic,  fan out on a plate flecked with leafy fronds of celery and a nutty pistachio flavored jus, crumbled bits of which added a textured crunch.

Speaking of crumbly, the flaky, buttery croissants studded with fat flecks of sea salt are a luxurious member of the exceptional bread
basket, options from which are circulated regularly by one of the servers, each with their own warm, freshly baked appeal.

Cauliflower in crab butter was richer, a welcome bridge of winter into spring.   It was roasted deeply to a burnished bronze, hunks of Alaskan king crab flavoring a rich brown butter studded with delicate sliver of nutty almonds.  It was a tiny portion, but profoundly flavorful.  As my eyes are usually bigger than my stomach, I initially craved a slightly more ample floret, but its richness proved it wisely portioned.  A warm potage of roasted lobster was equally intense, nuzzling hunks of tender crustacean and dense, waxy potatoes in a buttery cream, shrouded in an ample dusting of golden brown breadcrumbs.    The Modern's Chef Abram Bissell has a magical talent of pairing assertively complex sauces and seasonings that illuminate rather than overpower the primary ingredients.  Here, the potage itself is
is pronouncedly garlicky without overwhelming the precious lobster. 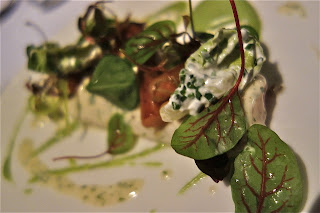 Progressive courses are more substantially sized.  A seabass filet stretched the width of the plate, boasting a lovely plushness, and littered with sprouty little greens just sturdy enough to support rich dollops of herbed cream.  As in fine art, there is a masterful balance in textures and colors, as well flavor and seasonings.  A dish, like this seabass, can at once seem decadent and delicate, a magical equilibrium of sensations. 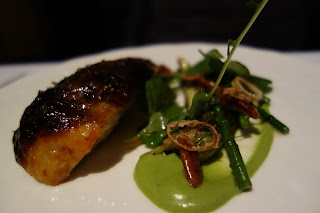 Had I been prescient of this phenomenon, I may too have partaken in the four course, adding the Beef & Bone marrow to my dance card, which I truly believe would somehow emerge less portentous than its description: Comte, marrow and all.   A chicken dish  bridged the two, modeled after The Nomad's rendition, where Bissell gained his notoriety.  Its luxurious strata of finely minced truffle slathered

under its bronzed vellum of deeply burnished skin, enriched with a luscious sauce of liquified foie gras spooned lavishly tableside, and stuffed with a moist dressing studded with toasty pecans. 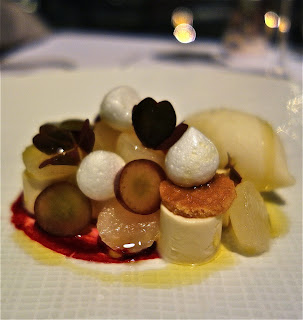 In the end, three courses for me, and four for my tablemate were easily ample enough that splitting a single dessert between the two of us was an ideal finale.  And we chose well, although I was really torn between the green apple mousse.  Instead, an almond blancmange made the cut, winning me over with black currants.  Befittingly, it was one of those modernist composed plates, various bits and bobs strategically places on a stark white dish.  But what was amazing about this one is that there wasn't a formula required to achieve deliciousness: the monochromatic pastiche of dense almond custard, fluffy little ivory marshmallows, icy discs of frozen pear, crisp slices of red grape, and spherical scoopettes of pear-olive oil sorbet could be mixed and matched in any random assortment of combinations, each to its own delightful effect.  I might have wished for a bit more black currant to play around with,  as it was relegated to a small but vibrant smear on the plate, but this is a paltry complaint.  As was any complaint I could have registered at The Modern,  had there been one.  Dinner here, legitimately, was long overdue.