Okay, this is very subjective an non-comprehensive.  This massive show is so vast you could never sift your way through all the misos and matchas, salts and sausages, chocolates and challahs to even make a dent in assessing all those on display.   But here are some highlights from what I experienced, in no order. 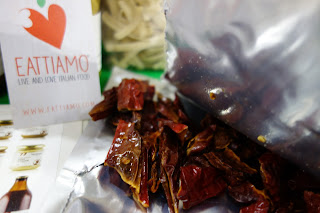 1.  In addition to the charmingly clever name of the company ("We eat" in Italianglish, but also it sticks that little "ti amo" onto the end), these mild, sundried chilies are addictively good.  They are so light and crisp they basically dissolve on the tongue, snacky as a potato chip but virtuous without frying or salt, plus a font of vegetable goodness.  Strangely enough, however, I couldn't find them for purchase on their website, so maybe they're a good thing yet to come.  In the meantime, you could partake in one of their lovingly curated Italian food boxes delivered straight to your door.  You can go low-risk with just a one month box  ($59), or commit to six months at $54 per box).  So yeah, they're not cheap, but they're filled with premium goodies like an artisanal hazelnut cake, numerous varieties of Torrone Piemontese, and precious olive oils varietals.  And who knows?  Maybe in due time, those dried peppers will arrive in your subscription box.  www.Eattiamo.com 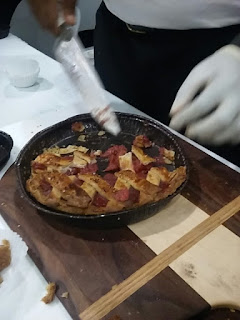 2.  Perfect Pie.  Need I say more?  Made from The Crustmaster Bill Yosses (dubbed so by POTUS Obama himself when he was the pastry chef at the White House), these pies, both sweet and savory, are everything you have ever desired in pie.  Savory truffled chicken pot pie balances humility and decadence all baked in a buttery latticework crust.  Piefruit pie (otherwise known as rhubarb) is my absolute favorite, but I could nor would shake no stick at the homey apple, the fruit sweetened just to amplify it.  Presidential, indeed.  www.perfectpie.com 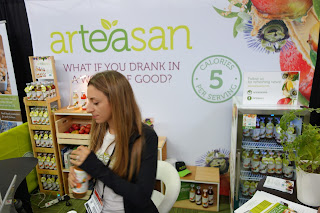 2.  arteasan White Tea is flavored with mango, holy basil and chamomile, but it is the passion flower that comes through along with the smooth, mellowness of the tea.  Whether it actually reduces stress and anxiety medicinally is probably scientifically unproven, but a few sips of the tea itself had me lapsing into such a pleasant, comfortable ease that I wouldn't argue against the point.  Clean, pure and refreshing practically non-caloric beverage (just ten calories for the entire bottle).  www.arteasan.com 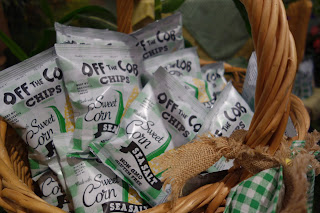 3.  Off the Cob Chips are off-the-charts corny!!  Seriously amplified corn taste in a crunchy chip, because they use non-GMO sweet corn with just a sprinkle of sea salt, these would be excellent vehicle for just about any chip-friendly salsa or dip, but I can't imagine a better one for eating brand-shucked naked.  I mean the chip, naked.  I mean the chip without any adornment... it's up to you whether you want to wear clothes or not when you eat them.   www.OffTheCobChips.com 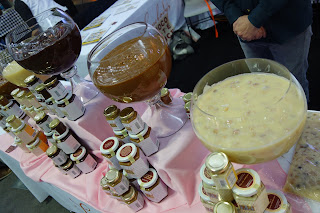 3.  Somebody's Mother's Chocolate Sauce's caramel sauce is gonna make you wish that somebody was you.  This stuff is so good you could eat it like pudding.  Rich and caramelly, I could see dipping apple slices or pretzel sticks, or getting way fancier by layering it in a millefeuille or some sort of trifle.  Added bonus that the website mashes up the letters of the name so "smothers" comes into the conversation.  Smother pretty much anything in this and mothers all over world will be proud.  "Naturally rich.  Velvety.  Perfect as a topping.  Cold. Or hot.  Especially good in the middle of the night."  Precisely.   www.somebodysmothers.com 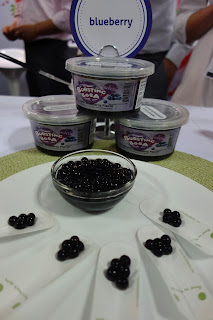 4.  Bossen Bursting Boba are delightfully buoyant little pearls of juice, encapsulated in a seaweed-extract bubble that keeps them afloat in juicy fruit syrup.  Like the tapioca beads in bubble tea, but much lighter and not at all chewy, they burst fruitiness into your mouth or whatever they're festooned upon.  Each "boba" has just a single calorie, the individual portion-sized cups are only 30 calories, so they're as guilt-free as they are fun to eat.  The kiwi and blueberry were my favorite flavors.  www.BossenStore.com 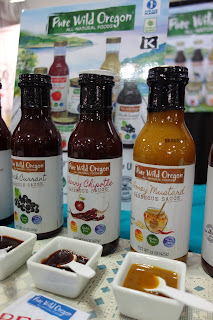 5.  Admittedly partial to all things Oregon, this Honey Mustard Dressing from Pure Wild Oregon is profoundly good (as well as ANYTHING they do with marionberries).  Sweet and tangy with a kick of mustardy heat, it'd make fetching bedfellows with anything from crudites to a char-grilled frank.  Beaver Brand might be more famous for their horseradish mustards, but this one I find far superior.  Pure Wild Oregon 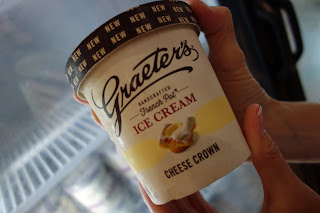 6.  Super yum for this flavor of Graeter's Ice Cream.  Personally, I like my ice cream with "stuff" in it... chunks and swirls and gobs- anything to contrast with the luscious creaminess of a good, custardy ice cream (as is Graeter's).  All their other flavors never wowed me.  The chips of chocolate too brittle, the others good, but plain.  But then in swoops Cheese Crown, a thick cheesecake ice cream tumbled with cinnamon-sugar hunks of danish and melting flakes of fondant icing.  Ben & Jerry, watch yer back.   Graeter's Ice Cream 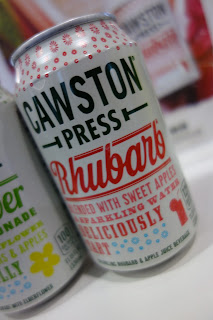 7.  I try never to drink my calories: I'd much rather eat them.  So sugar-free sodas, unsweetened iced tea and coffee, flavored seltzer are my usually go-to (non-alcoholic) tipples of choice.  But I'll have to make an exception now for Cawston Press's Rhubarb soda.  It's ridiculously tangy and pert with 12% pure rhubarb juice, sweetened with fresh pressed apple juice and sugar.  I mean, since you can't drink pie, this the most refreshing and titillating rendition of rhubarb imaginable.  Cawston Press 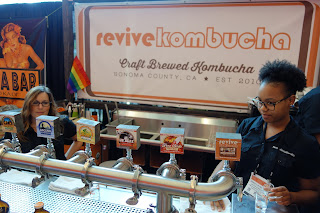 8.  I'm not a big kombucha fan.  I usually find it either a little raw-alcohol tasting or too vinegary.  Revive Kombucha turns that on its head, though.  The Revive brand is almost annoyingly healthy: organic, vegan and raw to add to the the inherent healthfulness of kombucha to begin with.  The winner of their line, though, is Ascend, a Vitamin-C boosted white tea blend with added Lysine for its cleansing properties, probiotics to boost immunity and assist in digestion, and a sugar content that is ultra-low to boot.  It is remarkably

smooth, less "zingy" than most kombuchas I've tried, and purely invigorating. They were serving it on tap a the Show, otherwise I would've shlepped home a case.  A case of their bottles, that is, which they reuse and recycle in a Bottle Exchange program that has salvaged 75% of their bottles distributed in the past five years.  Drink this and save the world.  Revive Kombucha 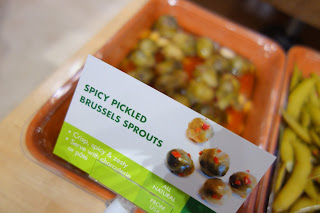 9.   Sue me for my passion for brussels sprouts, but these are the BOMB.  Spicy and pickly and downright addictive, Divina brand's Spicy Pickled Brussels Sprouts are a virtuous treat, perfect appetizer-type snacky vegs that would pair so well with a

cheese or charcuterie board, and add a novel touch at the same time.  They are, unfortunately, only available wholesale by the case.  But maybe if word gets out, they start 'em up for retail.   Food Match/Divina 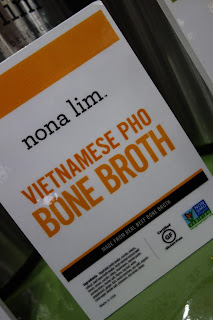 10.  Marco Canora isn't always there for you.  In case of an emergency (recipe- or cold-annihilating-wise), you're good with Nona Lim's Vietnamese Pho Bone Broth.  This stuff would make an excellent cooking base, but is delightfully nourishing and delicious on its own as a soup or beverage.  Like Marco's, there're no additives or preservatives- it's all made from homemade stocks of fresh and local produce and ingredients.  Nona Lim.


And as an honorable mention, I cannot leave out Big Fork Brands pork and uncured bacon sausages.  Problem is, I wasn't paying enough attention at the moment I sampled it, and I don't know which one I liked the best.... but I DEFinitely had a preference, and I kind of think it wasn't the Award Winning Hickory & Applewood smoked version (although it could've been), but the flavor profile made me think it might've been the Cracked Pepper one.  Regardless, I think I can pretty safely recommend any and all of these dogs.  Nitrate, nitrite, MSG, preservative, hormone and antibiotic free,  they leave out all the bad stuff and pack in as much porky goodness as absolutely possible.  Big Fork Brands