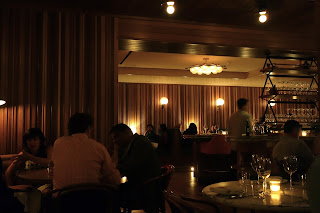 John McDonald strikes again, keeping his focus downtown by taking over the old Kittichai space at 60 Thompson Street, and enlisting Chef Jordan Frosolone to reign over this new Sicilian in the Village.  I couldn't find an immediate translation for "frosolone", but I'm leaning towards fra sole, which would translate to "between a big sun".  I like this, accuracy notwithstanding, and it segues nicely with the number of untraditional spellings throughout the menu, which may just be attributed to quirks of the Sicilian dialect.  I never made it here when it was the popular Thai restaurant of yore, so I can't compare the room, but at Sessanta (adopting the easy nomenclature of the street number in Italian), it's hard to forget you are dining in a hotel.  Stripey wallpaper in ruddy

reds and browns coordinate with a red tiled floor, but somehow there is still an office-y boxiness to it.  An eclectic mix of art
hangs on the walls, some Italo-centric, some graphic and colorful.   But it gives you something to admire until menus arrive: that, along with the very attractive clientele that Mr. McDonald always seems to attract. 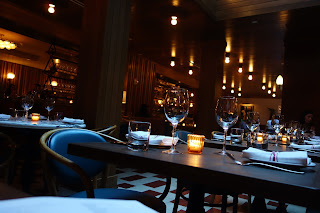 So the room gains appeal as it fills up, the lighting soft and warm so everyone looks even better.   A large skylight framed in frondy plants also breaks things up... and made we wonder how it was possible since the rest of the hotel rises above the ground floor restaurant.  But a little welcome appetizer arrives from the kitchen to distract me: a crunchy, toasted crostino topped with a warm, stewy compote of

summer squashes and eggplant, plush and sumptuous under a dusting a pungent parmesan.  Nothing revolutionary, but perfectly balanced and rich enough to warrant an  amuse-sized portion.  Ditto the steamy potato-cheese croquette: its crisp-fried exterior just substantial enough to encase its gooey, cheesy innards.  These are the kinds of things you want more and more of, but with dinner to follow are better kept in diminutive portions. 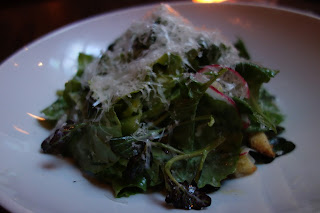 A salad of baby kale and romaine is moistened with just enough dressing to render the greens toothsome, shrouded in a feather-light grating of zesty pecorino nerello.  Chef is very conscientious of his cheese usage: there are dozens of unique Italian formaggi gracing different dishes, each paired thoughtfully with its cohorts, instead of just throwing parm on everything.  The pecorino here served as an assertive counterpoint for paper-thin, mild radishes and tender sweet beets cloched underneath.   A gorgeous fritto misto barely ensconced the variety of shrimp and vegetables in crunchy gossamer shells - even the lemon wedges were battered and fried, rendering them mild enough to munch along with everything else, bursting in your mouth with a gentle, tamed citrusiness. 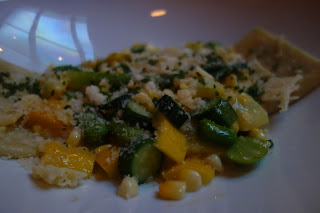 On the other hand, there is nothing gentle about a deceptively light-sounding Schiaffuni Raviolo, with its baby leeks and zucchini.  I imagined this resulting in a summery, bikini-friendlier pasta dish, but the bright succotash of produce occluded an enormous noodle pocket, fat with cheese-amplified cheese, stretching oozy and luxe between forkfuls, bedecked with a fine dusting of more grated cheese, and topped with frico (more fried cheese).  It was fantastically tasty, for the few bites I could manage, but I bowed out before even conquering it halfway.  I had to wonder if this might now be more successful shrunken and doled out like the bruschetta and croquette, a mini-version amuse. 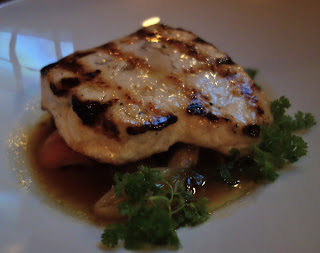 For an entree, secondo-style, I couldn't decide between meat and fish (the veal marsala read like the classic, appealingly so.  And our waiter recommended the branzino as a most popular item, but it felt a little "safe").  So I went for the two-birds-with-one-stone option: a surfy-turfy grilled swordfish served over pulled pork shoulder, some artichoke and carrot thrown in for good measure.  The fish was cut thick like a T-bone, and just as juicy.  The braising juices pooled deep below, begging for a starchy component to take advantage them, so I commandeered a bread basket- three slices of which just handled the overflow.  I think a thickened, gravy-er version might have worked better to prop up the fish over such a brothy sluice, although a very home-grown, round carrot nub and chunky artichokes did their part.  I'm a huge proponent of keeping the flesh above the fluid, so as not to sog things up.  But the flavors were outstanding: salty, meaty, umami-y.  And the sparsity of vegetables called for a side order of 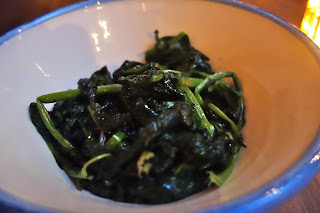 something leafy: there are five sides listed on the menu, but only two seemed appropriately vegetative.  I went for the chard with garlic and lemon, which just edged out roasted zucchini with pignoli and mint (might've been a better choice, actually.  The chard was great, but now I'm curious about that squash, whereas with the chard I pretty much knew what I was getting myself into, tasty as it was).  Starchier options included roasted corn (complete with  more cheese), shell beans slicked in oil, and rosemary potatoes.

On the sweet side of things, desserts are pretty standard dessert-y with Italian elements.  Aside from cannoli,  flecked with chips of chocolate and pistachio, a chocolate pudding with salted cookie crumbs and candied cashews, or a rhubarb crisp with creme anglaise could have been on pretty much any menu.  They do have a cookie plate of assorted Sicilian specialities: Sicilians like their biscotti nutty, so there are versions with almonds, hazelnuts, pistachios or sesame.  All in all, Sessanta performs solidly.... I'd rank it much higher than it's street number out of a hundred, for sure.  And with Frosolone's sensibility, I'd say that the best is yet to come, with the heartier ingredients and appetites of fall and winter just waiting for his expertise.

Posted by webdebnyc at 3:36 PM